Large packets of matzah fill the shelves of the kosher supermarket. An entire aisle is given over to Passover products at this time of year. Matzah are large, hard flour flatbreads that look like giant crackers or crusty breads. But there are also more and more special features.

“Otherwise, I’ve seen, there are more interesting types of matzah: high in fiber, okay, gluten-free,” says Ishai Rosenbaum. There are even matzahs ​​with chocolate and sprinkles on the shelves. “Good for Passover, but otherwise I’d probably skip them.”

He is an amateur cook and feeds two Internet blogs with recipes, one in German and the other in Hebrew. The particularity: All its recipes are vegan. So he likes to use matzah for cooking. They consist only of flour, water and a little salt.

“The most important thing I buy here is matzah flour, it’s actually not flour, it’s ground matzah and it’s mainly used to make matzah dumplings, which are very , very popular with us, makes it our favorite Passover meal,” he tells bloggers.

For the classic matzo dumplings recipe, you need both matzah flour and eggs. However, for the vegan version of Ishai Rosenbaum, which is supposed to do without animal products, the eggs must remain outside.

And another favorite dish from his childhood is to serve: gefilte fish. “It’s just such a nostalgic thing.”

Freedom and Spring on Passover

Ishai Rosenbaum grew up in a kibbutz in Israel in the 1970s and 1980s. There they lived a secular lifestyle and did not strictly adhere to kashrut, i.e. Jewish dietary rules – with the exception of the Passover.

This holiday was also celebrated on a large scale and kosher in the kibbutz, although with slight modifications, for example in the content of the Haggadah, i.e. the Passover story.

“We read our own Haggadah, at that time there was a Haggadah for all the kibbutzim, and this Haggadah just emphasized other things: less God and more freedom and spring, it was more about human ability and less about divine miracle,” he says. .

Baking matzah played an important role, especially for children. Matzah should be made from unleavened dough. This is meant to commemorate the exodus of the Israeli people from Egypt, when there was no time to let dough rise with leavening agents such as yeast. This is why matzahs ​​are so flat and hard.

“Well, we made the stove ourselves out of mud and straw – like the children of Israel did in Egypt, and there was a metal plate on it. Then we just made matzah with matzah flour and water and we cooked it on the plate.” Ishai Rosenbaum still likes to cook matzah himself, but now in a pot.

That night, however, the matzah comes out of the package so there’s more time for her personal favorite dish: matzah dumplings. “I can just eat them without pausing, so I could probably eat them all at once, but I’m trying to control myself.”

Why eggs when there are chickpeas?

“Mazoo flour, potato flour, oil, black pepper, salt and nutmeg. Also the water from the jar of chickpeas, because it is rich in protein and a good glue for the dumplings: because we don’t use eggs,” he explains. 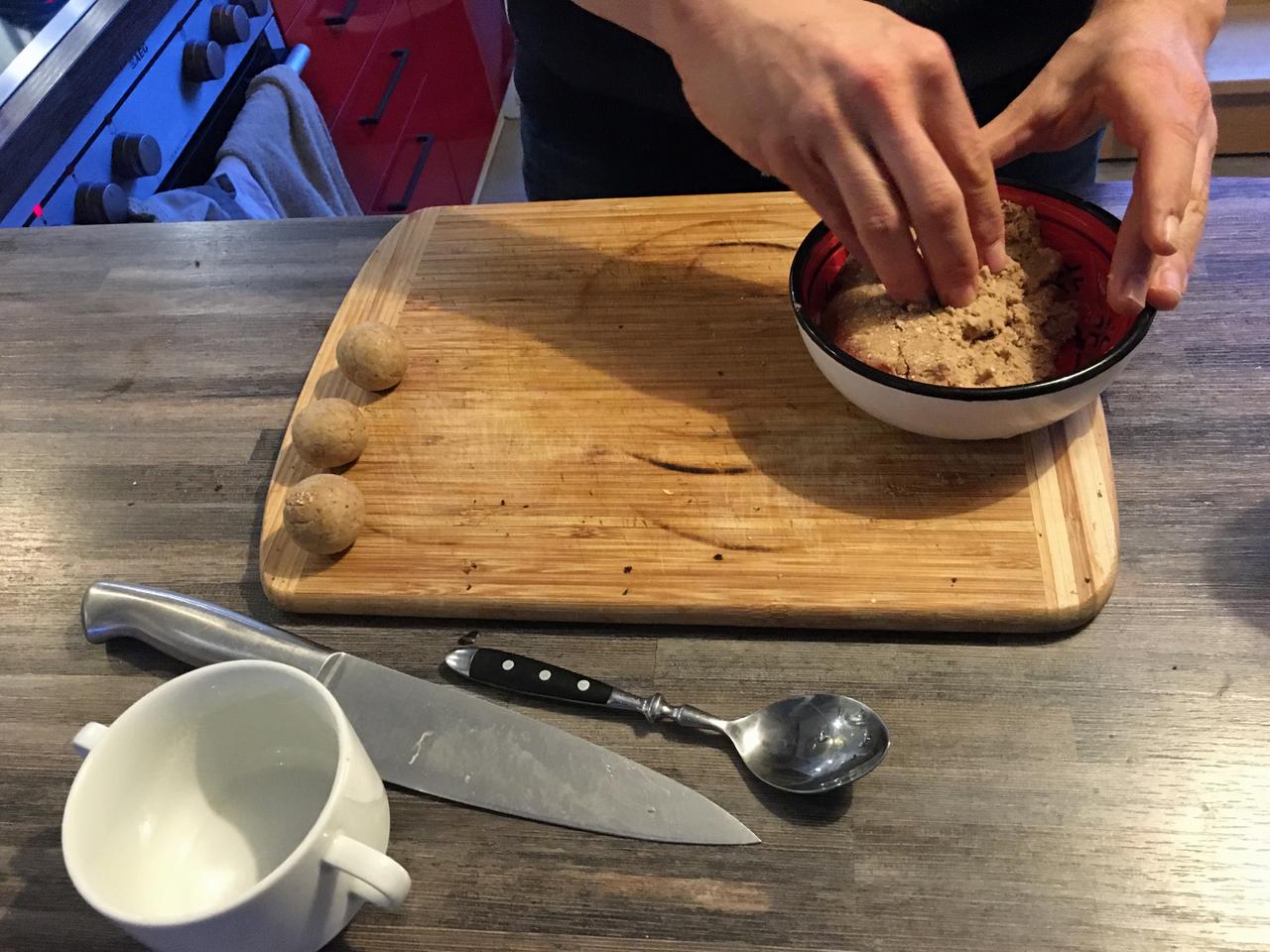 Everything is mixed and placed in the refrigerator to set. “And now comes the pleasure: I form the dumplings, just small balls, they must not be too big because they will grow bigger.”

The dumplings go into the water for about 15 minutes. “The water should only simmer and not boil completely, otherwise the dumplings may fall apart, and it would be very sad.”

Mix the ingredients together and let set in the refrigerator for at least 1/2 hour. Then form small balls, simmer in water over medium heat (15-20 minutes). Do not boil in the soup water, otherwise the soup will turn milky, and do not overcook, otherwise the dumplings will disintegrate.

Serve with the soup.

Ishai Rosenbaum explains that his love of culinary experiments also stems from his military service in Israel. At his tiny post, there was no staffed kitchen. He therefore cooked regularly for the other soldiers.

A lot of improvisational talent was needed. “Because the kitchen utensils weren’t the best quality and the ingredients were basically always the same, so you had to try and do different things with the same ingredients for the towers.”

In Israel, Ishai Rosenbaum also has a lot of vegetarian or vegan knowledge because it makes it easier to follow the rules of kashrut. The separation of milk and meat is then simply omitted. His own motivation for eating vegan, however, was different.

About eleven years ago, he saw a lecture on animal rights on the internet and forwarded it to his girlfriend at the time. “And when I came home in the evening, she said to me, ‘I saw the conference – can we go vegan? I think I will never be able to eat meat or origin products again animal. And it was my job to veganize our kitchen, and that’s what I did. And since then I’ve been vegan, just like my ex-girlfriend.”

This decision made Ishai Rosenbaum creative. Like the second course, for example: Gefilten Fisch.

“Well, I use seaweed for the fish flavor because it’s not fish,” he explains. “A carrot, onion and seaweed mashed together, a piece of smoked tofu. Now we add ground almonds and matzah flour.

The mass is shaped into oval patties that are vaguely reminiscent of fish. Brush them with oil and put them twice in the oven for 20 minutes. Between the two, they are turned. However, Ishai Rosenbaum deliberately omits one ingredient: sugar.

“I can’t imagine adding sugar to the mix now, but it has onion and carrot in it, so it’s a bit sweet ingredients. I think some would say gefilte fish without sugar is blasphemy, but yes.

Mash the seaweed, carrots and onions, then mash the tofu separately, mix with the almonds, matzah flour and spices. Leave to set in the fridge for at least 1/2 hour. Then shape the mixture into oval patties and place them on a baking sheet. Bake for 20 minutes at 170 degrees, flip, brush with oil and another 20 minutes on the other side.

Decorate as you wish, for example with carrot slices.

In his family, says Ishai Rosenbaum, there was always a lot of music played after the Passover meal. He can still sing many songs and accompany them on the ukulele.

“There is a very famous song where you count different things, so it goes from one to 13, the one God, the two tablets, the three fathers, the four mothers, the five books of Torah and so on”, he said. “It repeats over and over, and a lot of people just skip to the last phase. It’s about 20 minutes, so it’s really long, and it was so annoying to everyone that I wanted to sing the whole song.”

Today, Ishai Rosenbaum does not arrive at the end of the song. Meal is ready.

The meatballs are served with a vegetable soup. They have a perfect shape and are delicious. And thanks to the algae, the taste of filtered fish is surprisingly convincing without the fish. There is no dessert for dessert, but a Passover classic.